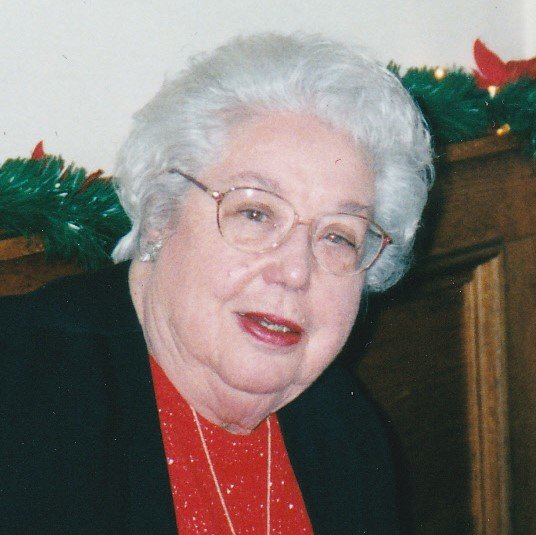 Doris M. Stalter Martin, 97, formerly of Point Pleasant and the Cedarcroft section of Brick Township, passed away on Sunday, September 22, 2019.

Born in Newark to the late George and Ruth (Smith) Stalter, Doris was raised in Belleville and lived in Point Pleasant from 1955 to 1976.  She then moved to her “dream house” on the Metedeconk River in Brick Township, before relocating to Elmcroft Senior Living Facility in  Martinsburg, WV, three years ago.

Doris was a graduate of Belleville High School and attended Essex Junior College before working as an executive secretary at Kidde Inc., which manufactured war armaments during World War II.  After the War, she served as the piano accompanist for several dance studios in Northern New Jersey and as a piano instructor at the Essex Conservatory of Music in Newark.

A gifted musical composer, she published many songs for children’s dance lessons for Kimbo Educational Records and Star-Way Dance Records, as well as composing many commercial jingles for G&S Productions that played on radio stations throughout the country.  Some of her dance songs can still be heard on You-Tube as the accompanying music for young tap and ballet dancers performing at local recitals. One of her proudest accomplishments was having several of her musical pieces set to choreography routines at the International Dance Masters Association Convention in New York City, where they were used for the instruction of dance teachers who attended from throughout the world.

When Doris and her husband moved to the Jersey Shore in 1955, she served as secretary and treasurer of the family business, Martin’s Fuel Service of Point Pleasant Beach, for more than 30 years. From the age of sixteen to ninety, Doris also taught private piano lessons to many students, inspiring some of them—including her daughter--to pursue their own careers as piano teachers and professional musicians.

Doris was a devoted member of Harvey Memorial United Methodist Church, Point Pleasant, where for many years she served as choir director, treasurer, and member of the finance committee, board of trustees, and the United Methodist Women.  She was also active in local community activities, including service as President and a director of the Cedarcroft Club.

Before her husband’s passing in 1998, the couple traveled extensively, visiting points of interest on every continent except Antarctica.  But despite her many activities, Doris also found great contentment in simply sitting with family and friends on her back porch enjoying the beautiful view of the Metedeconk River.

Visitation will be from 2 – 4 p.m., Sunday, October 6 at the Pable Evertz Funeral Home of Point Pleasant, 901 Beaver Dam Road, where at 3 p.m. a service will be held.  A reception will follow afterwards.  Interment will commence at 10 a.m. on Monday, October 7, at Greenwood Cemetery, Brielle.  In lieu of flowers please consider a donation in her memory to Harvey Memorial United Methodist Church, 1120 Arnold Ave., Point Pleasant, NJ 08742 www.harveyumc.org

Share Your Memory of
Doris
Upload Your Memory View All Memories
Be the first to upload a memory!
Share A Memory
Send Flowers