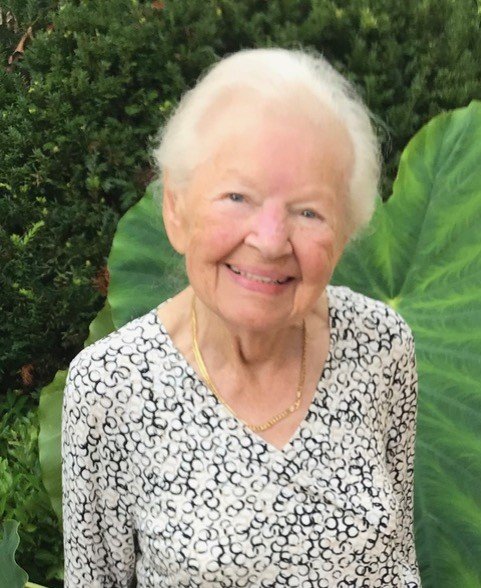 Walpurga Kessler, known as “Burgie,” died peacefully at 98 in her home in Point Pleasant, NJ, on Friday, February 19th. She was the beloved second wife of Dr. Richard W. Kessler who predeceased her. Burgie was born in 1922 to Josef Goller and Antonia Schuldes Goller in Langlammitz, a village in a section of the Czech Republic inhabited by Southern Germans. Her father was a restaurateur and they moved to Marienbad and Karlsbad. When he was hired by Prince Schoenburg-Waldenburg of the castle Glatzen to manage his hunting lodge in the Marienbad mountains, Burgie and her two sisters learned cooking skills and service to nobility and statesmen. She especially enjoyed walking through the forest to and from school. Burgie graduated from the International Hotel School in Marienbad and the Institute of Foreign Languages in Leipzig, Germany.  With her proficiency in English, during World War II she assisted the forestry service in Lemberg, Poland, and the hunting master at a German nature retreat on the North Sea. By the surrender of Germany in May 1945 she had survived Allied bombings in Munich. When she returned to her parents at Glatzen she found the American army had taken over the castle and the hunting lodge kitchen. Her stay was short, for American troops began to leave when Russian forces advanced to occupy Czechoslovakia. On November 1, 1945, as an American truck departed from Glatzen to Marienbad, Burgie hid with meager possessions under a tarpaulin at the feet of soldiers. She became an interpreter for recuperating troops in a converted hotel until she and her sisters found transport to Munich for future employment.

With post-war survival skills the siblings secured cramped housing in Munich and her parents began life anew in a refugee settlement in the suburb of Pentenried. Burgie worked first for a family, then at a U.S. Military Base switchboard, and eventually in the American Express office. There her link to America evolved: an oil magnet needed a cook and housekeeper for a new home outside Pasadena, CA, and offered her sponsorship. In 1952, just before Christmas, Burgie set sail for New York City, flying on to Los Angeles on New Year’s eve. She found the house still under construction and with little furniture, but she adapted quickly. Burgie remained with this family four years and greatly enjoyed the different landscape, climate, and new friends. After a visit to Germany to see her family, she decided to return to California and make America her home.

Burgie worked as a governess to two children of theatrical producers in Los Angeles until 1958 and then moved to the east coast. There she managed a new home in Mahwah, NJ, and a mountain home in the Poconos for Madeleine DuPont Ruoff. Burgie enjoyed busy years with the Ruoff family, but she took time to attain her U.S. Citizenship in 1962. Then a mutual acquaintance introduced her to Richard W. Kessler, MD, of New York. He had studied surgery in Munich and Berlin thirty years earlier and was also a recent widower. The match was immediately magical. On December 30, 1966, Richard Kessler, a.k.a. Dick, and Walpurga Anna Goller were married in the city.  When they tied the knot, Burgie acquired a residence in the Yorkville section of Manhattan, a historic home on the Manasquan River, and became the step-mother to four adult children, Richard, Jean, Hilary, and Elisabeth and four step-grandchildren. She brought delight to a family that had lost a wife and mother. Always the gracious hostess, Burgie was a fabulous cook and skilled at revising décor to return households into more charming homes. Tea with Burgie was a tasty and memorable event with warmth and care for all. The city house became the locale for two wedding receptions, Point Pleasant continued as a summer beach retreat, and a house in Pentenried served family travelers. City life meant Burgie took advantage of cultural events, and a course in decorative painting taught her to beautify everything from trays to antique furniture. The couple enjoyed well-photographed vacation travel to Germany, a stay in Iceland, and planned a modern winterized wing for the New Jersey house in order to retire from city life in 1986.

After their move to Point Pleasant, Burgie’s energy and care turned to creating beautiful gardens around their home and nurturing plants on a winter sun porch. As a gifted pianist she loved listening to music and opera and read avidly. The local library and historical society provided new friends and cultural enrichment.  When her husband became disabled from Parkinson’s disease, she dedicatedly cared for him at home. After his death in 1998, relatives and friends joined her for travels to musical events and European river cruises, but entertaining family and friends at home was always her talent and pleasure. Despite dementia in her final years, with help from others she continued to enjoy her meals, two cats, music, and views of river activities and sunsets plus wild life and nature. Burgie was greatly loved and will be missed by all. In America she is survived by three step-daughters, Jean Wolf, Hilary Palmer, and Elisabeth Caporale and husband John, nine step-grandchildren, and eleven step-great-grandchildren. Burgie’s two sisters pre-deceased her, but three nephews, cousins, and their off-spring in Europe also greatly mourn her loss.

A Celebration of Life for Burgie Kessler is planned for this summer.

Share Your Memory of
Walpurga
Upload Your Memory View All Memories
Be the first to upload a memory!
Share A Memory
Plant a Tree