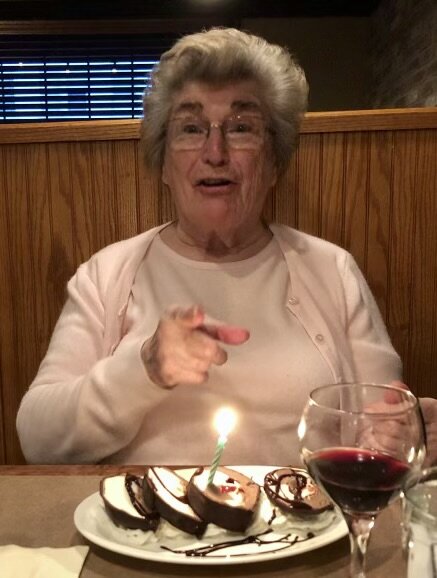 On Saturday, December 3, 2022, Elizabeth Tonkovich, a beloved wife, mother, grandmother, great-grandmother, and friend to many passed away with the loving comfort of her children by her side; she lived to ninety.

Born to Mary and Joseph Skrabonja, Elizabeth was raised in Mount Vernon, NY.  She married Joseph A. Tonkovich in 1951 and they celebrated seven children and fifty-two years together.

Elizabeth and Joe worked together at their business Ocean County Floor and Wall in Point Pleasant for thirty-four years. They spent many years traveling, enjoying Saturday night dinners after Mass with their friends, and Sunday mornings with their grandchildren and Hoffman donuts. They were involved in many community affairs especially the Rotary Club of Point Pleasant. Their annual Christmas Eve party was a time of joyous celebration that lasted into the early morning hours. Summer meant the pool was open and a gathering place for whomever of their children and grandchildren were around.

Joseph and Elizabeth were founding members of Saint Dominic Church. Elizabeth regularly volunteered at church and with the Saint Vincent de Paul Society.

Elizabeth’s greatest joy was her family and spending time with them.

Surviving are her daughter and son-in-law, Laura and William Doherty of Point Pleasant; five sons and daughters-in-law, Thomas and Bridget of Jackson, Joseph and Elizabeth of Brielle. Gregory and Donna of NC, Donald and Ruth of Toms River, and Christopher and Colleen of Lacey; a brother-in-law and sister- in-law, Bruce and Cindy of Toms River; seventeen grandchildren, and twenty great-grandchildren. She is also survived by her close childhood friend, Phyllis Lauria of Rhode Island.

In lieu of flowers, donations may be made in her memory to the Saint Vincent de Paul Society at Saint Dominic Parish, 250 Old Squan Road, Brick, NJ 08724

Share Your Memory of
Elizabeth
Upload Your Memory View All Memories
Be the first to upload a memory!
Share A Memory
Send Flowers
Plant a Tree